Who are the vaccine hesitant and why are they waiting? 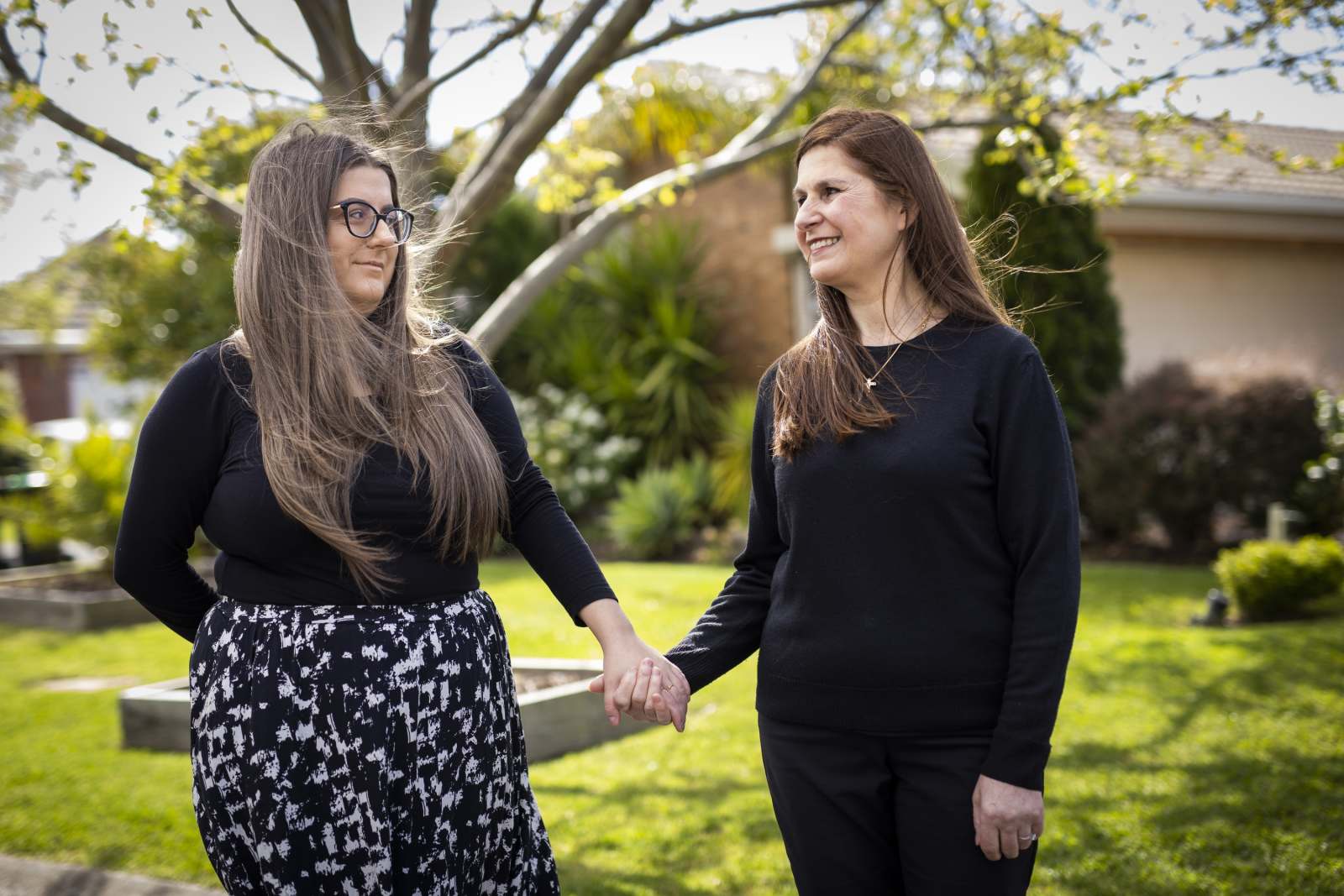 This article was first published in The Age on 9 October 2021.

The footage was almost too painful to watch.

Neti Ajro, a healthy 44-year-old from Melbourne’s north, was struggling for breath in his hospital bed.

“Guys, I’ve never had so much pain in my life … I’m a fit person. I can take a lot of pain,” the construction business owner said in a video uploaded to Facebook on September 12.

The short video went viral after being posted on the Facebook page of North Sunshine Eagles FC, the soccer club where Mr Ajro had once played. It led to an outpouring of community support.

But not everyone was sympathetic. There were people – including some Mr Ajro knew – who criticised his pro-vaccine message and even questioned whether he was a paid actor faking a COVID-19 diagnosis.

“Don’t tell others to take poison that ur own doctor can’t give u details of ingredients,” wrote one online commenter.

Mr Ajro, speaking to The Sunday Age and the Herald, said he was strong, ate well, worked long hours and thought there was little chance COVID-19 would hurt him. He’d never had a serious medical issue and had been “sitting on the fence” about getting a vaccine.

Within days of his infection, the pain was so bad he was unable to walk. His head was throbbing as if he’d been hit with a baseball bat. He thought he could die.

The response from those opposed to vaccines saddened him.

“These anti-vaxxers that are online, you listen to them and think maybe they’ve got something going,” he said. “I can give you my word that there is nothing in what they say.”

Yet Mr Ajro’s experience is not unusual. Misinformation, such as the false claim that vaccines can affect female fertility, is rife, particularly on social media.

The small number of Australians opposed to COVID vaccinations outright – estimated to be about 8 per cent – garner disproportionate attention, but health experts say their entrenched views are a problem as governments try to encourage as many people as possible to get vaccinated.

Data from the Melbourne Institute’s vaccine hesitancy tracker shows this group is continually shrinking, with those who said they don’t know if they will be vaccinated now at 6.8 per cent, compared to 16.8 per cent in April amid concern about the safety of the AstraZeneca vaccine.

Experts expect Australia will end up with high levels of vaccination by developed world standards. First dose rates in NSW for over 16s are about 90 per cent. Victoria is not far behind at around 85 per cent. On a first dose basis, Australia has already overtaken the US and is just behind Germany.

The problem has until now been mostly one of supply, and once those issues have been fully resolved, the Melbourne Institute predicts that Australia can achieve at least 85 per cent of the adult population fully vaccinated.

It hasn’t happened by accident. Tireless grassroots work within communities has been required to reach those who are on the fence about the jab, said Professor Holly Seale, a vaccine communications researcher from the University of NSW.

But further outreach and data collection will need to continue in the coming months to find those who still need convincing.

“We will get to a point where the people who are willing to run in and roll up their sleeves and get immunised will start to slow down,” she said.

“Beyond that then, we want to see, are there still people out there in the community who … have just been bunkering down and kind of trying to ride out the situation for concern that they just don’t want to receive the AstraZeneca vaccine? I think we need to get in and do some more work with that group.”

Aggie Geromanolis, 25, jumped at the chance to receive the vaccination, but it took much longer to convince her mother, Maria, to get the jab.

It was frustrating for Ms Geromanolis, who works on blood-borne viruses as a program officer at the North Western Melbourne Primary Health Network.

“I used to have these conversations daily with Mum about the COVID vaccine and I just couldn’t understand why you’d protect yourself against every other illness, but you’re not doing it for something like this that could put you in the ICU,” she said.

Her mother, 61, who was born in Greece and moved to Australia when she was 23, describes herself as well-informed, trusting in science and law-abiding, but for months still felt incredibly uneasy about receiving the vaccine. Her main barrier was a fear of the side effects, she said.

“When it all first started, it was all very new, and it was very, very quick, and we didn’t know anything about it, so I decided that I was not going to get the vaccine straight away, and that I would wait,” she said.

She said many of her friends were not rushing to get vaccinated, believing they did not want “to put something into their bodies that no doctor would give them a guarantee about”.

“There was fear involved, they were scared … it’s more about them waiting. They’re waiting for Novavax, which I understand is just being brought in. So they are delaying getting vaccinated,” she said.

Ms Geromanolis said she had also noticed a common theme within her community around vaccination.

“People really didn’t want to be pushed to do anything. Now that it’s mandated, it’s like one more thing that you’re being told what to do… they want to have the freedom to choose to do it themselves, and that was Mum, very much.”

But many conversations between Mrs Geromanolis and her daughters helped convince her.

In the end, she says the highly contagious nature of the virus, the new variants, and what she felt was her responsibility to her family and community were all reasons she changed her mind.

Mrs Geromanolis said it was these discussions that helped to allay her fears, as well those with her GP, who unreservedly told her to get vaccinated. She received the AstraZeneca vaccine in August, a few months after she became eligible.

The concerns Mrs Geromanolis held which delayed her vaccination are not uncommon, said Professor Seale.

She said vaccine hesitancy occurs across the community and depends on the availability, eligibility, access issues, but also the epidemiology.

University of Sydney Professor Julie Leask, a public health researcher, said the data points to trust being one of the most important foundations of vaccine uptake and acceptance.

Good communication is not enough, she says, governments and institutions need to be more open than they’d usually be to build and maintain trust.

“If that means being more transparent than you usually would be then do it,” she said.

Focusing on hesitancy can also be used to deflect attention from failures by governments.

Estimates put the hard core vaccine opposers at just 2 to 4 per cent of the Australian population, Professor Leask said. A YouGov survey indicated Australia had very low levels of outright vaccine opposition compared to other countries.

“We should target and focus on the hesitant people who may need a few nudges or social norming around vaccination.”

Professor Leask said hesitancy was a little more common and mainstream than outright opposition to vaccines.

And who are those most opposed to vaccines?

A recent study published in the British Medical Journal surveyed eight wealthy countries from late 2020 to early 2021. What marked those hesitant or opposed to vaccines was a lack of trust in authorities and scientists, conspiratorial thinking and a lack of concern about COVID-19.

University of Queensland professor of management Matthew Hornsey, said his own research has found an “extraordinarily” large statistical relationship between holding conspiracy theories views and being anti-vax.

“You can predict with a degree of certainty whether someone is vaccine hesitant from knowing whether they think Princess Diana was murdered.”

The conspiracy theories can take root in deep distrust of big pharma or the government.

“The content of the conspiracy will depend on whether the person is left or right,” he said.

“Many conspiracy theorists start from a reasonable place, but use flawed logic to end up with an extreme conclusion. They’re doing a lot of research, but they’re doing their research like a lawyer might, interpreting evidence selectively in a way that’s designed to reach their preferred conclusion. They only hear what they want to hear.”

Mr Ajro’s health improved enough to be released from a hospital over a week ago.

His biggest regret was how his experience affected his family.

“Watching my children crying and going through what they went through and me not being in control of my situation was the hardest thing,” he said.

“I thought even if I got COVID I’d be OK, I was strong enough to take it. Let me tell you it’s not worth it … you would never want to wish it on your worst enemies, you’ve got literally no control over your own body.”

Disclaimer: This article was provided by The Age. While every effort has been made to ensure the information is accurate, North Western Melbourne Primary Health Network does not warrant or represent the accuracy, currency and completeness of any information or material included within.