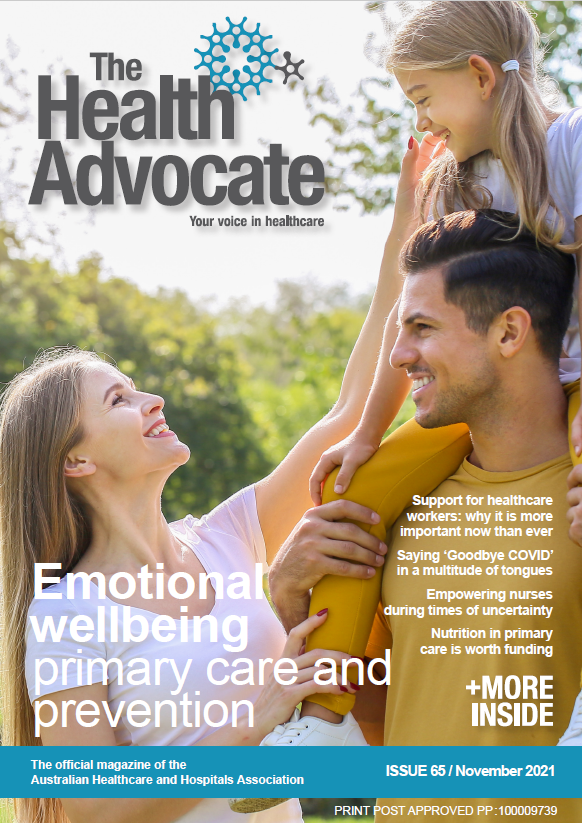 This article was published in The Health Advocate November issue, written by NWMPHN Communications and Media Advistor Andrew Masterson.

The Health Advocate is the The Australian Healthcare and Hospitals Association’s (AHHA) high quality, insightful and entertaining magazine filled with the thoughts and opinions of Australia’s leading health managers, academics and clinicians. The magazine keeps you up to date on the latest developments and thinking in the Australian health system.

“Language is so much more than just a set of words. It encapsulates entire modes of thought, cultural protocols, and ways of classifying the world and everything in it.

This means — as any linguist will confirm — translating messages from one language into another is much more complex than simply substituting letters. And when it comes to encouraging people to
take life-saving action by getting vaccinated against COVID-19, the exercise becomes far more than academic.

This was the challenge that faced the communications team of North Western Melbourne Primary Health Network (NWMPHN) earlier this year, when vaccines became available and the push to distribute them began.

NWMPHN encompasses 13 Local Government Areas containing more than 1.6 million people. Around 40% of them were born overseas, and about the same percentage speak a language other than English in the home. Both figures are significantly above the Victorian average. The region also contains a very high number of settled refugees and asylum seekers.

The region has been the hardest hit in every wave of infections since the pandemic began. Large parts of the population are impacted by several identified risk factors. These include insecure casual employment in high-risk settings such as distribution centres, large families living under single roofs or in social housing, and people with chronic health conditions.

Across state and commonwealth platforms, vaccination messaging is rolled out overwhelmingly in English. It also takes a broad-brush approach that embodies mainstream cultural norms that are sometimes at odds with the mindsets and belief systems of Melbourne’s culturally and linguistically diverse (CALD) communities.

The need to reach some of these communities was self-evident and urgent. The question of how to do so was a more complex matter.

‘It was critically important that we produced material that not only resonated with CALD communities, but which set the right tone,’ explained NWMPHN’s CEO, Chris Carter.

‘The message was uniform — get vaccinated to protect your own health and that of your family, friends and community — but the wording was highly dependent on the target group. It was very important that the messaging grew out of each community, organically, instead of being imposed on it from outside.’

To achieve this, the project — dubbed ‘Goodbye COVID — identified the 20 most widely spoken languages other than English spoken in the catchment area. These included Arabic, Amharic, Dinka, Dari, Italian, Karen, Oromo, Punjabi, Turkish, Urdu and Vietnamese.

A uniform script was then written and distributed to volunteer members of each target community with an invitation to not just translate it but to adapt it to reflect the language and precepts of the group. Members of the community were then invited to deliver the messages.

NWMPHN teamed up with Melbourne-based video production house Jasper Picture Company to produce a set of minute-long clips — each filmed in COVID-safe conditions.

‘The videos have been very well received by the community,’ said Chris. ‘They’ve been shared very widely on social media channels, replayed on languages-other-than-English radio, television and internet broadcast stations. They have also attracted coverage in many community newspapers.

‘So far, the videos have been viewed over half a million times — and, most importantly, we are receiving reports than vaccine uptake in the target communities is increasing. We’d like to think that this material has been a contributing factor there.’

The Goodbye COVID project followed a set of multilingual videos in 18 languages encouraging COVID-safe behaviour, that the Primary Health Network made in June 2020, just before Melbourne’s long lockdown, and then a batch of videos co-written with Cantonese, Mandarin, Dinka, Hindi and Vietnamese community members about looking after your mental health, released earlier this year. NWMPHN has since been approached by other communities wishing to collaborate on more
public health resources in other languages.

‘Creating multilingual videos is fiddly — translation is seldom smooth — but it’s so worthwhile when you see people respond, and get feedback that they’re stoked to see their peers and leaders communicating about COVID in their original language,’ Chris said.”

Read the full November edition of The Health Advocate here