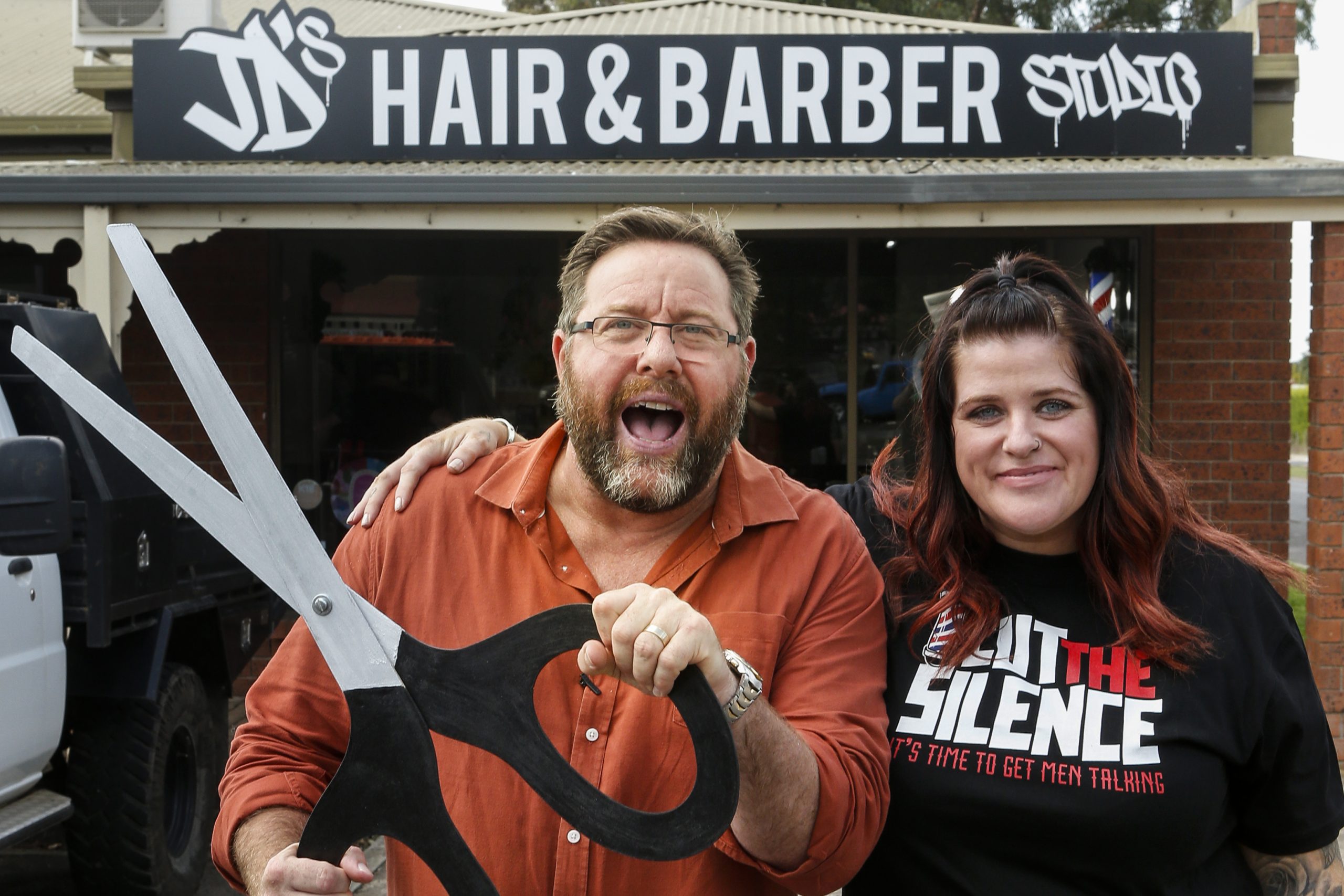 This article was first published in Midland Express on 17 May 2022.

Did you hear about the creative crew who took a bunch of actors to a barbershop for a chat?

No punchline. No joke. But, instead, part of a new campaign targeting the most vulnerable group at risk of suicide in the Macedon Ranges – men.

‘Cut the Silence’ is about giving men safe places to talk.

Affable Australian actor, Shane Jacobson, who lives locally with his young family, is fronting the campaign.

Shane spent a day interviewing other high-profile local men while they sat at JD’s Hair and Barber Studio in Romsey.

“It’s no secret that men aren’t always great at expressing their feelings or seeking out help when they need,” he said.

“I’ve done a couple of TV shows encouraging blokes to look after themselves, but Cut the Silence was a chance to get involved at a local level and tackle the issue in my own backyard, the Macedon Ranges.

“Let’s hope it gets men talking and saves some lives.”

The video interviews will hit websites and social media next month, with the aim of encouraging men to talk about issues challenging their mental health

Cut the Silence is being organised by the Macedon Ranges Suicide Prevention Action Group and Sunbury and Cobaw Community Health, with funding from North Western Melbourne Primary Health Network, in the lead up to Men’s Health Week starting June 13.

Five barbershops across the Macedon Ranges are currently participating, with the organisers looking to recruit more.

The barbershop staff have received mental health and suicide prevention training and will carry information on local mental health services and supports as a Cut the Silence Barbershop.

If you have a barbershop or hair salon in the Macedon Ranges and want to find out how you can support the campaign or access training, contact info@mrspag.com

Gisborne resident and advertising creative, Mat Garbutt, produced the campaign concept after he was asked by Ken Reither, a member of Macedon Ranges Suicide Prevention Action Group, for advice on how to engage men in personal conversations.

Mat knew that capturing a broad range of men was integral to the project’s success.

“Sports clubs are obvious spots to find men, but not all blokes play sport,” he said.

“Barbershops are traditionally safe spaces for discussions. I ran the idea past my son who had started a barbering apprenticeship in Gisborne, and spoke to Shane and Ken. They liked the idea and it took off.”

The Macedon Ranges has a higher suicide rate than the state average with men accounting for four in five deaths.

The statistics are a stark reminder that mental illness does not discriminate by postcode or socioeconomic status.

Cut the Silence aims to address a significant area found wanting in relation to men’s health that was highlighted last year in #thehumancode research project, funded by NWMPHN.

The project included representatives from local services and community organisations and a youth working group.

Nearly half of those surveyed in the shire said boys and men were not comfortable seeking out health services when they needed them.

One in five men said they had experienced shame in asking for help. And over half agreed that men would not be comfortable talking about their mental health before they reached breaking point.