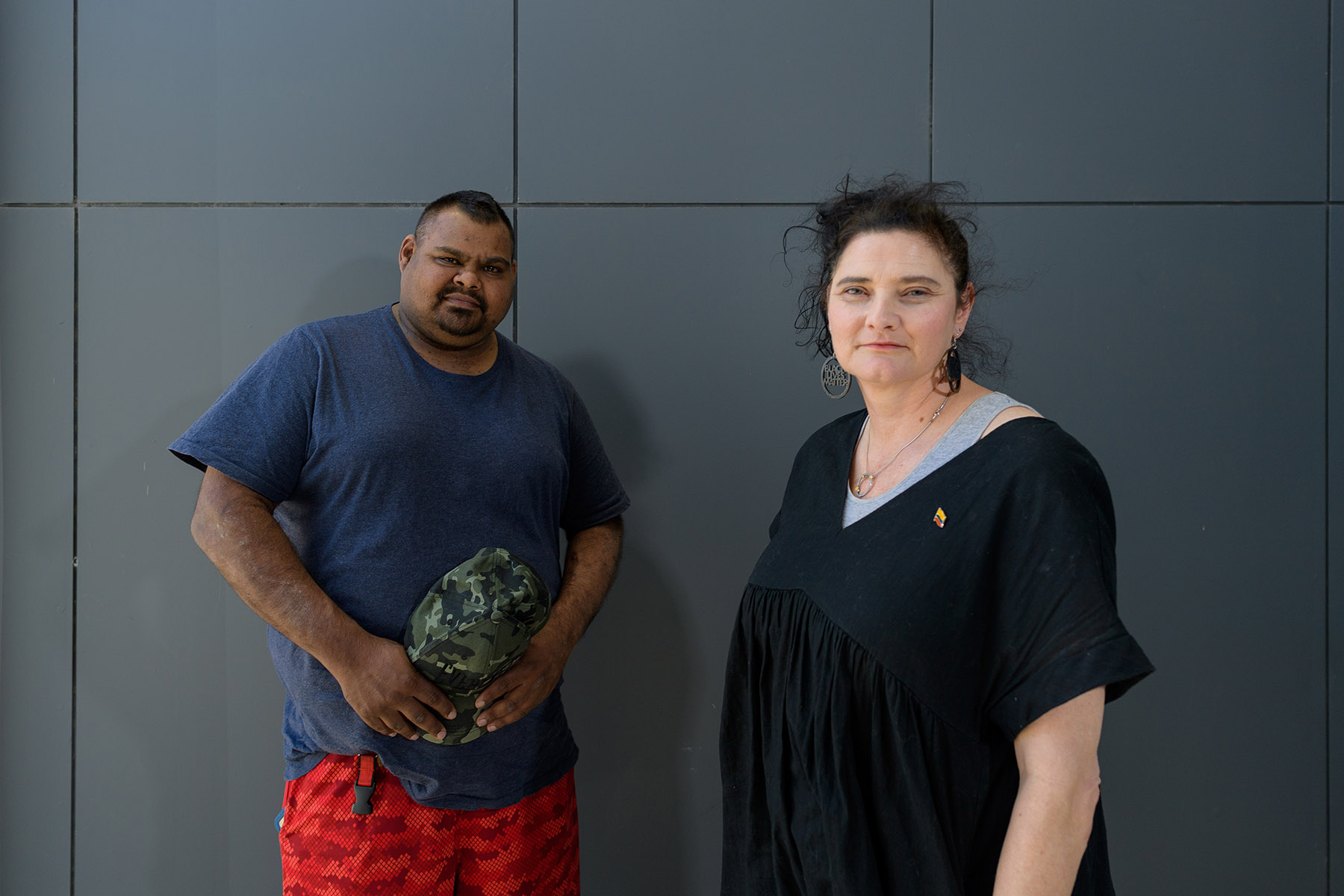 This article first appeared in the Summer 2019 edition of our Primary Pulse magazine. Subscribe here.

For too long, people with multiple chronic conditions, as well as those living with both mental and physical health issues, have had their conditions treated in isolation from one another – often leading to poorer health outcomes. But new care coordination and support programs are breaking down barriers to better care for those with complex health issues.

Vinay Cooper moved from Western Australia earlier this year and initially struggled to find appropriate and accessible care for his health issues, including diabetes, cataracts and kidney failure.

But a fortuitous referral to diabetes nurse educator Sally Berger, after receiving dialysis treatment at Sunshine Hospital, has set him on the path to a healthier future.

Ms Berger is also a Care Coordinator with the Integrated Team Care (ITC) program, which is supporting Aboriginal and Torres Strait Islander people in our region living with chronic disease.

She was able to enrol Mr Cooper in the program and centralise his care through the Braybrook Community Hub.

“I wasn’t living too far [from here] so I didn’t want to be going here, there and everywhere,” Mr Cooper said. “It’s all here and I haven’t been anywhere else since I first came here.

“Once I got my foot in the door I started knowing a lot more. [Now I’ve got a] dietitian, podiatrist, everything that I needed was all here.”

Mr Cooper had been a semi-professional darts player, but cataracts on both his eyes had limited his ability to play and were threatening his sight. The cataracts on his left eye were removed before he left Western Australia, but he had been struggling to access care to investigate his right eye before joining the program.

“His eyes are really important for him and he said to me ‘I don’t want to lose my eyes’, which is pretty scary, isn’t it?” Ms Berger said.

“Because he’s got some scarring, the ophthalmologist said they would like a surgeon but unfortunately the wait times for that were about a year and a half. I was worried that Vinay might need to access [surgery] earlier and I didn’t want him to lose sight.

“So we paid for a specialist to check out his eyes. Luckily, he doesn’t need surgery currently but I think it was just nice to know that rather than waiting that amount of time.”

As well as getting treatment for his eyes, Mr Cooper has also been able to get his blood sugar and phosphate levels under control since joining the program. But for him the main benefits can’t be measured medically.

“I got to play darts again,” Mr Cooper said. “That’s my hobby. I don’t do a lot of other things, but I’ve been brought up playing darts.

“So, I need my eyes. If I didn’t have my eyes I wouldn’t be here today, I’d be back home, and I’d probably just stay in the bush.

“[Sally’s] been really helpful. When I do have appointments come up, she always texts me or gives me a ring, lets me know you’ve got one coming up. Without her I wouldn’t have got to where I am.”

The overall goal of the program is to equip Mr Cooper and other ITC clients with the knowledge and support they need to successfully manage their own care, and lead healthier, more connected lives.

While the ICC program is specifically focused on improving the physical health of people with severe and complex mental illness, it shares a focus with the ITC program on breaking down logistical and systemic barriers faced by people who require care for multiple health conditions.

Mental health and physical health are fundamentally intertwined, with research tracking the link between the two going at least as far back at least as far as the early 1990s. More recently, a 2016 policy paper from The Royal Australian and New Zealand College of Psychiatrists showed that people living with severe mental illness are two to three times more likely to suffer from diabetes and that their rate of cardiovascular disease is almost four times that of the general population.

Then President of the College, Professor Mal Hopwood, said people with serious mental illness commonly live 15 years less than others in the community.

“What is often not recognised even by clinicians is that most do not die as a result of their mental illness, but from the very same chronic physical conditions that are successfully treated in their neighbours and friends,” Professor Hopwood said.

Further evidence from youth mental health provider Orygen shows this association becomes clear almost as soon as mental illness first develops, which is often when a person is in their teens and early twenties.

Rates of obesity are higher for young people living with a mental illness, making them more likely to develop chronic physical conditions as they get older. Their nutrition is also likely to be poorer, with 42% of young people living with a serious mental illness eating one or less serve of vegetables a day, much lower than the general population.

Young people with mental illness are also much more likely to use alcohol, tobacco and other drugs. Drug misuse in this group is five times higher than that of their peers who are not living with mental ill health.

Greg Bourke, Health Impacts Leader at community health service cohealth, who are implementing the ICC program in Maribyrnong and Brimbank, said these are just some of the factors that lead to poorer health outcomes.

“It’s quite common that people with mental health [issues] have difficulties with their physical health,” Mr Bourke said. “Often that’s because [they might come from] a low socio-economic background, so there’s difficulty with employment, with housing, difficulty with diet and regular food. All of those thing impact on your physical health.”

While the link between mental illness and physical health has been clear for a long time, treating physical health and mental health issues in concert is still the exception rather than the rule.

Di Nally, Victorian Western Regional Manager for Neami National, who are implementing ICC in Moonee Valley, Moreland and Hume, said people will often be treated for whichever of their health needs is most urgent, even if their physical health crisis is being driven by their mental health, or vice versa.

“People who have experienced severe mental health often haven’t looked after their physical health,” Ms Nally said. “That becomes secondary in their lives, and often isn’t picked up particularly well as their mental health is the primary issue being addressed.”

Ms Nally said that chronic physical health issues were often only treated when they reached crisis level or when the person was in recovery from their mental health condition.

Even when a person is receiving treatment for all their conditions, it is likely they need to travel to see different health services who may not be communicating with one another.

ICC program implementation is in its early stages, but Mr Bourke said a priority is providing care coordination to help people overcome the barriers and siloed care delivery that are preventing them from receiving optimal care.

“That could be around transport, that could be around Wake Up Calls, what we call ‘care facilitation’. Secondly, it might be about some motivational interviewing and actual self-management, such as education and health coaching, to get someone more ready for change in their physical health world.

“Then thirdly, it is . . . making the appropriate referrals. So often there’s a suite of interventions that are required for someone’s physical health.’’

Mr Bourke said the care coordinator makes sure that those referrals and appointments are made and that there is a “warm handover” between each service, which allows the client to receive care without having to tell their whole story again and again.

Like with the ITC program, the key goal is to give people in the ICC program the tools, knowledge and motivation to manage their own care.

“We work with people so that they can ultimately self-manage,” Ms Nally said. “And part of what we also deliver is the optimal health program, which is a structured program to support people to identify their goals, and pathways to reach those goals.”

The ITC and ICC programs are both relatively small, locally focused programs, but NWMPHN CEO Adjunct Associate Professor Christopher Carter said those types of tailored and flexible initiatives have a huge potential to reform the health system for the better.

“Every part of our health is connected, and health conditions don’t respect boundaries or silos,” A/Prof Carter said.

“If we can shift our focus from individual conditions and treatments to a more person-centred model, then we have a great opportunity to create better care for our whole community.”

The task of creating a person-centred health system goes beyond individual programs. Like other Primary Health Networks across Australia, NWMPHN is working on a Regional Plan for Mental Health. This is one of the ways we are creating change at a system and well as local level.

NWMPHN is engaging with a range of stakeholders for the project, including local hospital networks, other service providers and especially consumers, to ensure the final plan reflects a shared understanding around the key issues and opportunities to improve mental health in our region.

The plan will also acknowledge that mental health does not exist in isolation from other health issues, with AOD and Suicide Prevention being formally included in the plan’s remit.

NWMPHN Executive Director of Service Development and Reform Jag Dhaliwal said the key steps at this stage are to capture the experiences of people who come into contact with the system, whether as consumers, carers or as a health professional.

“What we’re doing with the Regional Plan is actually enabling those people that use the service system, whether it’s mental health or AOD, to tell us what works well and what doesn’t,” Mr Dhaliwal said. “And I think it’s the ‘what doesn’t work well’ that we really want to know, so we can start working with users of the services and providers of services to start to connect better supports together.”